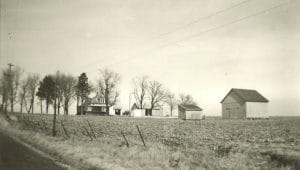 A Farm Too Small To Feed The Family

Curtis Orchard is part of an Illinois centennial farm founded when the Curtis family settled just southwest of the city of Champaign in 1873. For most of its history, the farm sustained the Curtis family through corn, soybeans and hogs. However, by 1956, the year Paul married Joyce Day of Bement, the acreage owned by Paul Curtis and his father Eugene had become too small to support two families. Paul decided to farm part-time while pursuing a different full-time career. In the early 1960’s he returned to the University of Illinois and completed a PhD in plant physiology.

After graduating in 1968, Paul joined Champaign-Urbana’s fledgling community college, Parkland. He would stay there for twenty years as an instructor, eventually becoming head of its Business Division. In the early 1970’s Paul experienced a spiritual epiphany. He gave his life to Jesus Christ. This event led him to re-evaluate every aspect of his life. Paul wondered why God had given him a farm that was too small to support his family. He knew that less than 2% of the US population still lived on a working farm. He worried that people were losing touch with agriculture and how their food is produced. Along with his new-found faith, he wanted to do everything possible to put joy into people’s lives and bring families together.

The First Steps to Becoming an Orchard

One day,  Paul mulled his options as he savored the satisfying crunch of a juicy apple. Suddenly the answer became obvious. He decided to transform the farm into an apple orchard. He wanted a place where people could connect with each other and agriculture through apple picking. In 1977, Paul and Joyce took the first small step by planting 700 trees on three acres. The trees looked like sticks in the ground, and didn’t require much care that first year. So,Paul and Joyce added another 1700 trees the following year.

Making the Best of Bad Weather

In the summer of 1980, Paul and Joyce nurtured their first small crop of apples, and looked forward to opening to the public for the first time. They had converted a small outbuilding into a makeshift store. Then one day a hail storm swept through and damaged much of the crop. Paul and Joyce surveyed the damage and realized they had never considered that not every apple would be sold as a number one (perfect for eating) – even in a good year. Now they were looking at a crop in which at least two thirds of the apples were seconds (bruised, cut, but still good for cooking) at best. Paul still has a saying from that year, “When life gives you lemons you make lemonade, but when life gives you hail damaged apples you make apple cider.” He went out and bought a small cider press that year, and started making apple cider. It has been an award winning Curtis Orchard favorite ever since.

The Next Generation and a Growing Community

Another event changed the family in 1980. The Curtis’ daughter Debbie met a young man, Randy Graham. He had some Ag experience and started helping at the farm. They married in 1981, and joined the business after Randy graduated from the University of Illinois in 1983, becoming co-owners in 1994. Together, with a shared vision of faith, family and farm fun, the Curtis’ and Graham’s have provided their community and Illinois with one of the most beloved and often visited Agricultural tourism destinations in the state. Furthermore, since Champaign-Urbana serves as a temporary home for thousands of international students at the University of Illinois, Curtis Orchard & Pumpkin Patch has been able to spread a taste of Illinois agriculture around the world. It warms the hearts of Paul & Joyce Curtis and Randy & Debbie Graham to see people of every nation and culture mingling together and enjoying one another’s company on this historic family farm.

The tradition continues! Recently, one of the Graham’s five children and their spouse

joined the business full-time. As a fresh energetic team paired with experience they continue what Paul and Joyce Curtis began nearly forty years ago. They see opportunities through new eyes, and hope to implement new inventive ways to connect families with one other and understand the importance of agriculture.

From prairie, to farmland, to apple orchard … how this piece of central Illinois changed!  Who knew that this land would someday be one of the area’s favorite places for family fun? 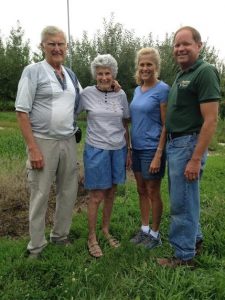 Now it’s time to make some history of your own.  Start a family tradition here.  You have plenty of choices: pick apples & pumpkins, feed goats, celebrate birthdays, and much more.  Fresh country air and plenty of memories are waiting for you at Curtis Orchard.

Now you can get email alerts when your favorite apple varieties are ready for you. Check it out!

Pumpkins, apple cider, food, corn maze..so much to do. We go often! Shady spots, places to sit and rest, and inflatable slide for the kiddos.

Had dinner here with the family, afterwards we picked pumpkins with the grandkids. Everyone was friendly and helpful on my menu selections. The kids had a ball in the pumpkin patch! The store was awesome! I will definetly visit again whenever I’m in Champaign!!!

I’m so beyond thrilled we have such a treasure so close to home. Such a great little place!

I really enjoyed It! the kids enjoyed picking out their pumpkins, we enjoyed buying our hot apple cider perfect day for that and it was very good! also our caramel apples and popcorn, apple donuts and more, cant wait to go again if you get to cold just go inside to shop a bit….

Always enjoy the atmosphere when my family is there!! Will go back every year!!

Pecan, Pumpkin, and Apple… oh pie!
Love the pies, cider donuts, and the Oz themed playground for the kids.
Their shoppe is huge and full of great gifts for a one-stop-shop! Stock up for parties or the holidays.

“Love this place — we go every year!”

Curtis Orchard is filled with plenty of activities for young and old! Every time we go we can’t leave without getting some of there delicious Apple Cider and donuts! Don’t forget to bring quarters so you can feed the goats and chickens! My boys love being able to ride the ponies and slide down the big slides, and of course it’s not tradition without taking the tractor wagon ride through the orchard then walking out into the patch to find the biggest pumpkin!

Awesome place especially for the kids all food is homemade apple donuts and apple cider are amazing staff are super friendly they have a bit to do there for the kids feels like home.